Older than it may seem, but still spicier more than you could imagine! Today, I invite you to travel back to the car clubs diary and find out how this week’s featured iconic supercar made it to the billboard of one of the most sought-after and top muscle cars twoscore and a decade ago in the bald eagle’s territory, and see for yourself if it deserves the 70s’ “I do”.

This week, let’s take a look at one of the classic U.S. supercars

Pantera is one of De Tomaso’s supercars. Its birth was driven by the conviction of a car racing driver and industrialist named Alejandro de Tomaso, who started his De Tomaso Automobili in Modena, Italy in 1959 – a time when the ideas of US-Italian car melding were on its crest and a decade when Italian companies were crossing their fingers to enter into the U.S. market. At the height of Italian-American car breeding experiments, Italian manufacturers did not have forged deals that allowed American companies to closely watch and get involved in the car manufacturing itself. The US involvement was just limited to Italians’ opportunity to simply buy crate engines from the United States. This convention had been in-place for years until De Tomaso’s luck descended from heaven at the so-called “perfect time”. Driven by strong will and motivation, De Tomaso, which was originally into building prototype and racing cars,  thought of breaking the bars of car production’s typical makeup by venturing into the construction of a sports model and entering a deal with  Ford Motor  Company.

It is worth noting that while car histories tell that the Italian- American crossbreeding of cars was not something new, it is also undeniably true that the melding of Italianate bodywork with an engine cast and forged by Uncle Sam was something that big boys had to celebrate in the 70s. Pantera was not imported the full-time it was produced – this had made it different and perhaps the reason why it was rated high among car-curiosity catalysts when it was rolled out of the Modena factory.

In defiance of Conventions

When first introduced, Pantera daringly challenged the 70s supercar ruling physique and makeup by offering striking aesthetics and an exotic mid-engine layout at a relatively affordable tag at around 10 grand, that is, half the price of Ferrari in all Ford’s Lincoln-Mercury dealers across the United States. And while it carried Italian geographical indication, Pantera used American-bred V-8 performance- making it a brilliant brood of the unforgettable Italian-American love affair in the car industry.

Pantera, as compared to its leading competitors Ferrari and Lamborghini, could be considered mongrel: a car of mixed descends. Nonetheless, its patrons were able to officially list it on the billboard’s hottest breeds- winning the hearts of its progenitors’ descendants! Needless to say, Pantera is an aesthetically Italian supercar with American muscle: American V-8 Grunt. Some car enthusiasts’ smirking faces would have turned to Pantera for its non-purebred lineage or surprising ground-breaking technology, but many of its “told stories” had told about its capability of stinging any driver who learned not the bowing ethics and did not pay it due respect. 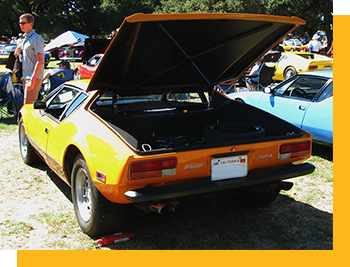 De Tomaso and Ford, and its Covenant

In the late 1960s, when Ford was looking for a high-performance GT car to replace the Shelby Cobra and rivals Chevrolet Corvette and Ferrari Dino, De Tomaso took advantage of the seemingly inevitable forthcoming opportunities, and from there, decided to produce a better unit. Later, De Tomaso and Ford turned the wheel to get their feet under the table and inked the deal: De Tomasoproduced a mid-engine, Ford-powered coupe. The production began, and in late 1971 Pantera marked its beginning in the U.S. for sale in its Lincoln-Mercury dealerships. A year after its debut, over 1,000 units were sold. It was like a movie that became a box office hit on its first day!

Pantera was not the first car produced by De Tomaso. It was not the first engineered supercar that used Ford 351 either. Even before its conception, De Tomaso Mangusta already used the Ford 351 Cleveland engine. Indeed, Mangusta was the first product when De Tomaso and Ford forged an agreement that marked the beginning of the sale of Italian supercars to the American market. But, what stood out of all the De Tomaso’s cars was the Pantera. It was especially in respect of brand association and formed car clubs. It was a success commercially. With all due respect to Mangusta, perhaps, the most fitting narrative, if one has to make about its role in the De Tomaso-Ford car production covenant, was its walk-on part to represent the mold in which De Tomaso would be cast soon. But, trying to stamp its unique fingerprints, Pantera had a unibody and utilized the engine and transaxle as stressed members. It also had a fully independent suspension that provided excellent handling and disc brakes with solid rotors and Ferodo pads hiding behind the light and stylish Campagnolo magnesium wheels.

The Italian-American breed of a mid-engine exotic supercar was designed by Tom Tjaarda at Ghia, and its monocoque chassis was designed by Gian Paolo Dallara. It has unequal independent A-arm suspension, rack-and-pinion steering, four-wheel disc brakes, and a staggering Campagnolo magnesium alloy wheels. Additionally, the chassis on the Pantera is directed to the back and is even lighter. It also has more rooms and has an air-conditioning system to make it even cooler. 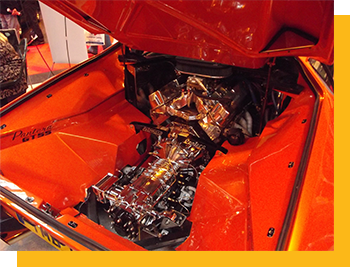 All these, combined with an entirely new 300-plus horsepower V-8 bolted to a five-speed ZF transaxle, the first generation of De Tomaso Pantera which has a resounding speed of 159mph at an engine speed of just 6050 rpm, is much considered modern-day wonders of the world compared to Manguta, its predecessor. No wonder it had some guts to take its first road in Modena in 1970, in its most daring poise and later on, it crossed the Atlantic to grab some spotlight at the New York Auto Show.

However, De Tomaso’s production system had most likely been completely borrowed from the proposition that procedures are always not a be-all, end-all solution, and had probably practiced the principles of stratification that all therein are not created equal. Despite its impressive and exotic design, Pantera is considered tame when compared to other cars. The car beast began to start losing its strength and momentum due to corrosion-related concerns, ergonomics problems, and sometimes dainty electrics and poor cooling systems, particularly those sold during its debut.

In a bid to improve its quality, De Tomaso opened the door for Ford to get involved in its succeeding production of car units and proposed the precision stamping for the body panels to boost up the quality. In late 1972, the Pantera Lusso was born and was proudly introduced to the market. It addressed the previous Pantera’s quality issues. This time, a new character was seen by the public with its new black-finished bumper, upgraded aerodynamics, a special gauge pod, and the new 266-horsepower Cleveland engine.

In 1974, before the culmination of Pantera’s production,  De Tomaso further enhanced the quality of Pantera by introducing Pantera GTS to the market. It came with Campagnolo wheels one-inch wider than stock, a blacked-out hood and rear deck, rivet-mounted flares, a sport steering wheel, GTS graphics,  and a GT stamped into the VIN. Unfortunately,  such improvements couldn’t compete with the Euro-spec vehicles that were already gaining consumer support for having added performance enhancers such as high-compression engines and bigger wheels, among others – some improvements that were yet to be introduced to U.S -spec vehicles.

A deal of a short-lived honeymoon

At first, it seemed to be a great opportunity for both companies. It was as if De Tomaso had found its giant twin, and the latter had found its young, yet size-increasing arm to nail the right concoction- just right to further gain brand reputation, reach a wider market, and probably, earn more sales. And yes, they nailed it! De Tomaso took advantage of the existing channel and all sales and service support it needed. On the other side, Ford’s existing network of Lincoln-Mercury dealers was given access to a supercar that even its mother company did not have in their showrooms. However, the honeymoon seemed like a shot-gunned deal. Despite its hard-wearing 351 Cleveland, the good terms did not last long. Their agreement ended after four years. The importation of Pantera to the U.S shores also ended and their union is now a thing of the past..

The honeymoon, though short-lived, had sound benefits to De Tomaso. Within two decades of its commercial reign, the Pantera had transformed the whole De Tomaso to a full-fledged high-volume supercar producer. However, from its inception in 1970, the data as to the number of units produced during its partnership is yet to be reconciled as the two have different data to show. Ford says 6,091 were produced while De Tomaso claims 5,286. Other records also show that a total of 6,128 Panteras went out from the factories in Modena before the lasso that was tied between them was cut off.

Although the limited production of Pantera stayed after 1974, it was finally phased out in 1993.

While Pantera did not earn much of the love like the Ferraris and Lamborghinis and other Italian supercars of the early 1970s in the US car market despite its affordability. It earned some pride and levels of exoticiticism that confused Ford’s customers who were dropping by in Lincoln-Mercury showrooms alongside Comets, Cougars, and Continentals. While it seemed that Pantera was not as striking as Ferrari and Lamborghini, it is still counted as a laudable iconic automobile. Especially that it was sold in the market at times when there was a sparse population of mid-engine GT cars.